The fire service is steeped in history dating back to the first use of fire as a tool. From the first uses of fire came the first accidents and disasters with fire, and just as soon as fire was discovered, so were the needs of efforts to control this force. So where does the history of the fire service begin? Does it begin in the mythological days when Prometheus, the benefactor of man, stole fire from the gods and gave it to man? Does it begin in 24 BC. When the Roman emperor Augustus instituted “watchmen” to patrol the city and sound an alarm at the sight of fire? Or in 1648 when fire wardens were appointed in New Amsterdam (New York), to patrol the city with buckets, hooks and ladders? The history of the fire service certainly has roots stemming from all these times, however, the history of the modern day fire service as we know it in this country began in 1736, in Philadelphia, Penn. The man who established the first organized fire company in this country, also help found this country, invented bifocals, wrote Poor Richard’s Almanac, studied electricity, and drafted the Declaration Of Independence….Benjamin Franklin.

Prior to 1736, several fire companies existed throughout New England providing fire suppression only to members of their companies. The majority of the city residents had to rely only the efforts of their neighbors in the event of a fire. Franklin, having witnessed several conflagrations as a child in Boston, understood the importance of an organized fire company to protect everyone. It was not until a 1736 conflagration in the city of Boston was Franklin allowed to establish the “Union Fire Company”. On December 7, 1736 this company was started with 30 volunteers, the first to sign up and to become the 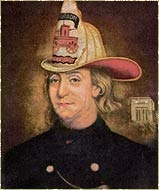 first official volunteer firefighter in American history was Isaac Paschall. The company was armed with leather buckets, wall hooks and ladders, that they paid for themselves and carried by hand to every fire. Shortly after the union fire company’s inception, other community members were eager to join; these men were encouraged to start their own companies so as to better protect the city from fire. Born from this decision were companies such as: Hand-in-Hand, Heart-in-Hand, and the Fellowship companies.

These companies have long since been disbanded, and replaced with municipal companies of both volunteer and professional ranks to serve their communities. And although many of the traditions of the fire service have been lost or forgotten over the generations, the founding principals and traditions continue to live strong in every company across the country: Pride, Honor and Dedication.