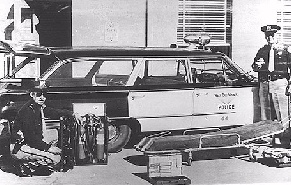 The era of Emergency Medical Services in West Des Moines started in the early 60s with a regular station wagon modified to carry a cot for patient transport. This police vehicle, staffed by police officers from the police auxiliary, did not allow for much patient care pre-hospital. Affectionately known as the Band-Aid squad, their main goal was to scoop up the patient and get them to the nearest hospital as fast as their wheels could carry them.

The notion of pre-hospital care was in its infancy at this time, but the ever-evolving need for EMS services gave rise to better transport vehicles and equipment. Carryall type vehicles, again modified for transport of a patient, were the second vehicles used as ambulances. Staffed now by fire medics trained in first aid procedures, this vehicle was top heavy, crude riding, and provided limited space inside for patient care and comfort.

The early vans were the first ambulances built especially for patient transport. They not only provided the patients with a better ride, but also allowed the medics more room to function around the patient and provide better care. Eventually, these designs gave rise to the style of ambulances that we currently see today. One ambulance was all that was needed to handle the needs of the city at this time. 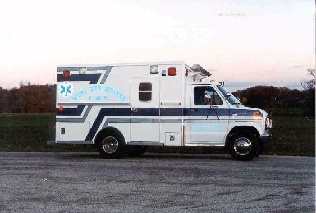 Some very important changes took place in this era of EMS. Equipment was becoming more sophisticated and medics were receiving more training in providing pre-hospital care. City leaders, realizing the benefit these services would provide to its citizens, made EMS a full department and increased the number of ambulances serving the city to two.

As EMS continued to evolve nationally, West Des Moines kept up with the pace. Around 1982, the ground work was laid for the advent of paramedic squads able to secure patient airways, initiate IV access, give medications for pain control, treat cardiac arrhythmias, defibrillate cardiac arrests, and many other advanced care procedures that, until then, were provided only at hospitals. A unique mix of volunteers as well as a dedicated core of full time personnel played an integral part in helping the service become a huge success in advanced EMS professional emergency response.