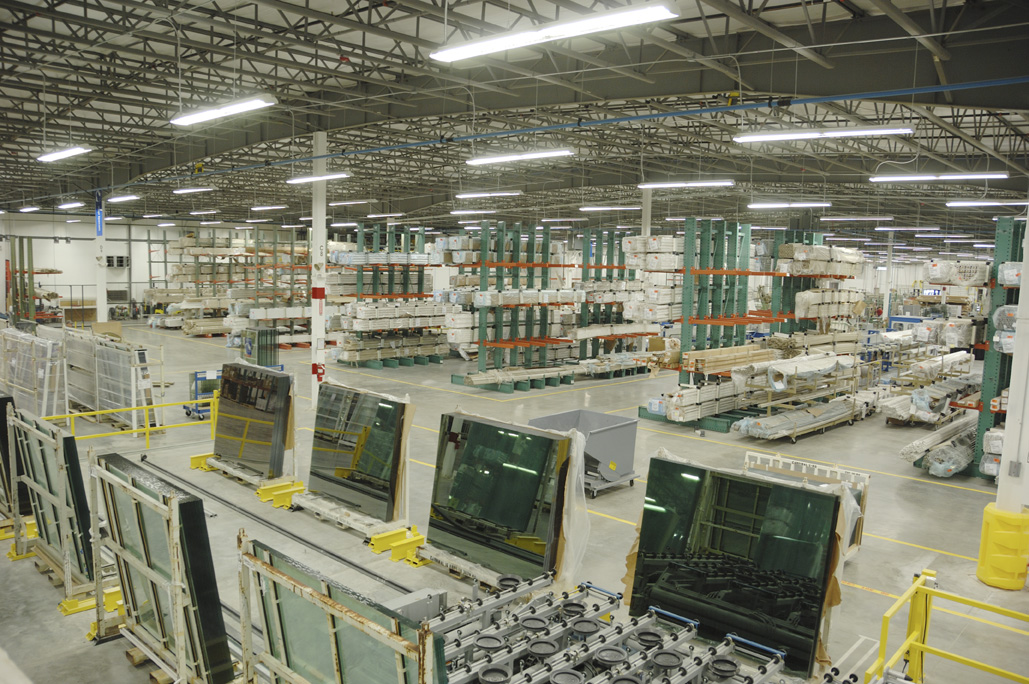 Windsor Windows & Doors and West Des Moines have grown up with one another. Company President Mark Rieser doesn’t dismiss as coincidence the parallel paths traveled by the City and the company he heads, but as an example of the kind of leadership and expertise that City development officials offer to better position business and industry for growth.

Windsor Windows, a Woodgrain Millwork company, traces both its beginning in 1946 and its name to Windsor Heights, a suburb that borders West Des Moines on the north and east. Known as Windsor Wood Working Inc. at the time, it was a small company with only about a dozen employees known for their pride in craftsmanship and strong Midwestern work ethic that remain company hallmarks today. In 1987, Windsor was acquired by Woodgrain Millwork Inc., the largest U.S. manufacturer of pre-finished moldings and interior pine doors. The business alliance has given Windsor an expanding national market share, with 170 distributors across the United States, Canada and Mexico. The company has grown to more than 700 employees at its corporate offices and manufacturing operations in West Des Moines, and at its other production plants in North Carolina, Texas and Alabama.

Windsor’s infrastructure needs include dependable interstate highway access for the movement of freight in and out of West Des Moines, where it operates two large manufacturing plants covering a combined total of 340,000 square feet. Rieser credits West Des Moines with recognizing the importance of offering a variety of benefits, such as easy access to air travel and a variety of restaurant, entertainment and lodging options to meet the diverse needs of the 400 industry executives and other guests who visit Windsor’s corporate headquarters every year.

One of the greatest resources available to growing companies like Windsor Windows& Doors is access to a talented pool of white- and blue-collar workers, Rieser said.

“That’s one of the reasons we chose to stay in West Des Moines,” Rieser said of the company’s decision to keep its corporate offices in West Des Moines when it was acquired by Woodgrain Millworks. “Our roots are here, and we draw from a wonderful, diverse base of employees who are highly skilled in a number of different areas. That’s central to choosing this location.”

During the 40 years Windsor Windows & Doors has been doing business in West Des Moines, City and development officials have been strong partners in the company’s growth, even as focus is placed on high-growth sectors like financial services, biosciences and technology.

For example, when Windsor’s growth spurred an expansion of manufacturing facilities at the corporate headquarters location near a primarily residential area, West Des Moines’ Community and Economic Development Director Clyde Evans and other City officials helped Windsor executives understand residents’ sensitivities and offered design and landscaping suggestions that made the expansion more visually attractive to its neighbors.

“Clyde’s attitude was that ‘we are here to make your project successful,’” Rieser said. 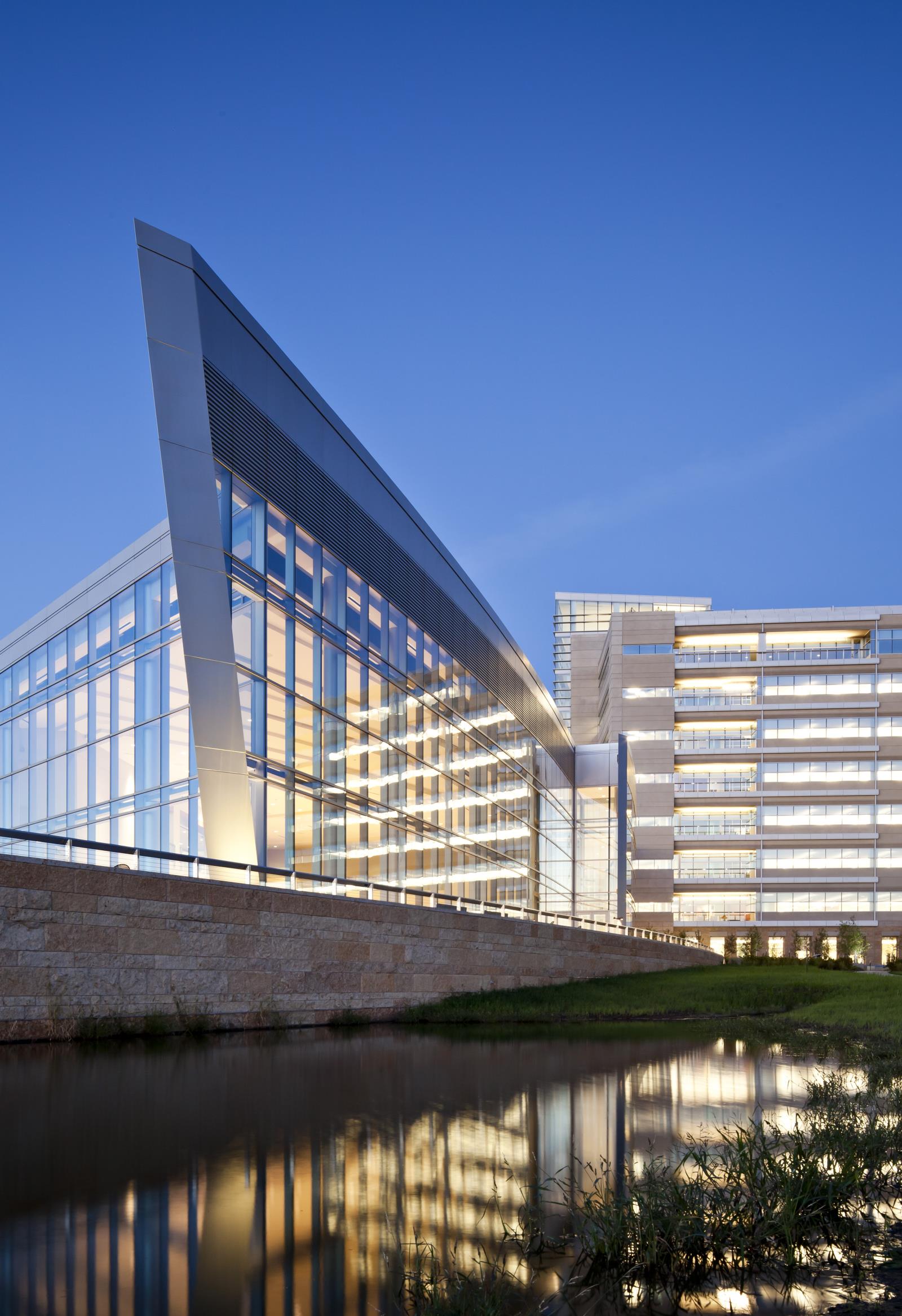 Aviva’s eight-story headquarters is the 24th LEED Gold building in the state and fourth in the Des Moines metropolitan area.

“Environmental responsibility and sustainability is a core value of our corporation,” said Chris Littlefield, President and CEO of Aviva USA. “We knew from the start that attaining gold-level LEED certification would be a challenge given we were building from scratch on a new site.”

Aviva USA, which specializes in selling indexed life insurance policies and annuities, is located at Jordan Creek Parkway and Mills Civic Parkway, and employs 1,500 people at this site.

Features that contributed to the LEED certification include motion-sensor and auto-dimming lighting in offices and conference rooms; Iowa limestone and other materials quarried or purchased locally; water-efficient fixtures; an established wetland habitat on the southwest corner of the campus; and priority parking for low-emitting and fuel-efficient vehicles, as well as for those employees who travel to work by carpool.

In addition, the company investigated ways to have an environmentally friendly cafeteria to serve its employees and contract workers. It did so through the discovery of a state of the art garbage disposal that grinds kitchen waste –food, plastic forks and juice bottles – into a barely moist pulp that is then cooked and regurgitated as fluffy compost.

“I don’t know that all of it is being composted, but the bulk of our food that is being cooked and prepared is making its way right back here,” said Mike Hartschen, the company’s building and facilities director. “I would estimate about 80 percent.”

In announcing Aviva’s LEED Gold certification, U.S. Green Building Council President, CEO and Founding Chairman Rick Fedrizzi said that building operations are 40 percent of the solution to the challenge of global climate change, and he credited Aviva with setting an important example.

“While climate change is a global problem, innovative companies like Aviva are addressing it through local solutions,” he said.