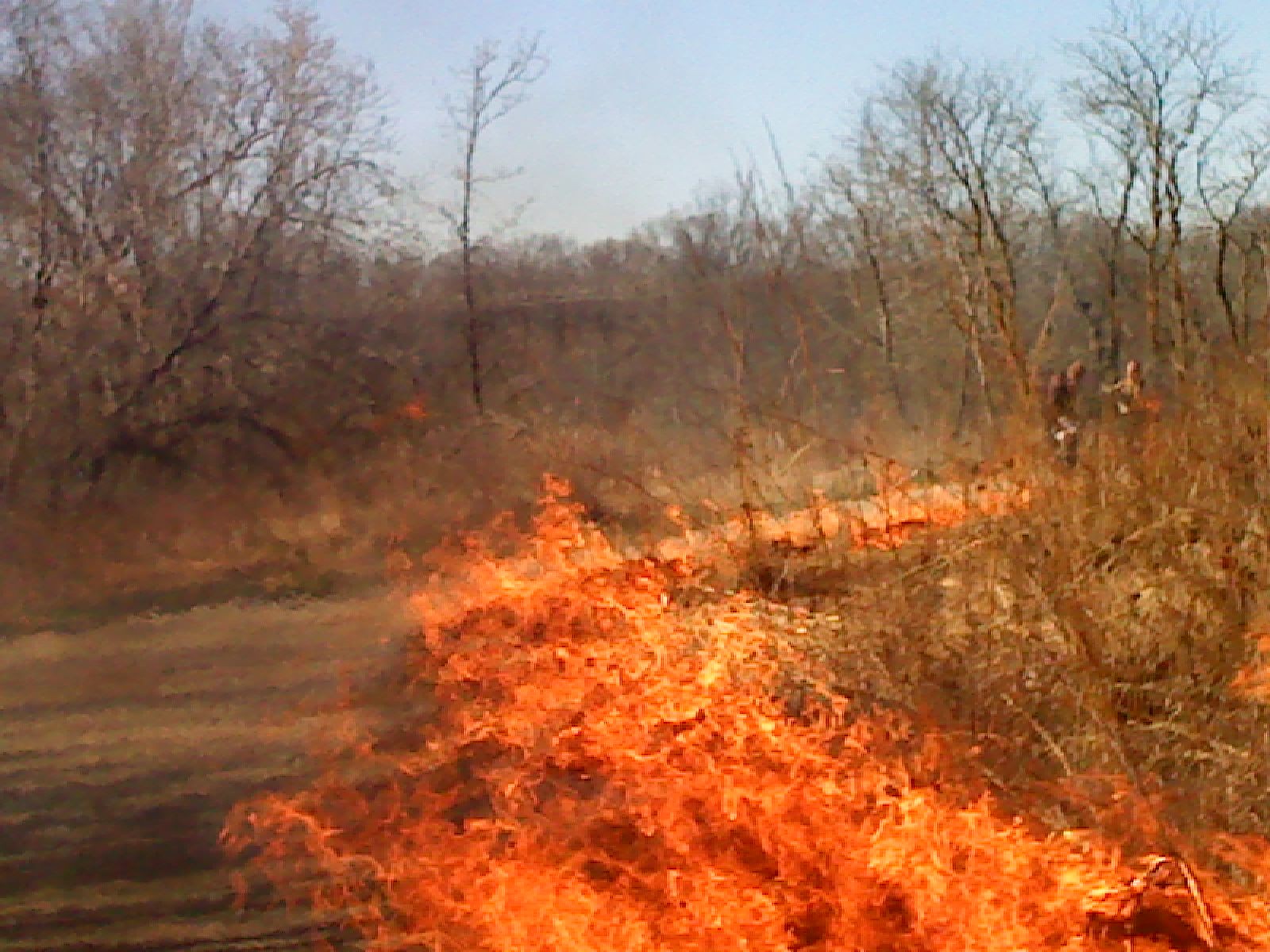 In 2005, four Parks & Recreation Department staff attended the Midwest Wildland Fire School and completed their first year of training to conduct prescribed burns on public property.  A formal program was started and plans now include prescribed burns of grassland areas wherever and whenever feasible.

When Europeans came to settle in the Midwest, one of the first impacts they had on the land was to suppress fire.  For thousands of years fire swept across the plains and created the tall grass prairie, wetland, and savannah ecosystems, which in turn gave Iowa its deep rich soil and clean water.  In the time since then, most of those ecosystems that were dependent on fire were eliminated or repressed to small pockets.  Without fire, these systems revert to what many people, even those educated in ecology, consider “natural”, when in fact these areas are as man-made as a tilled crop field.  Remnant prairies and overgrown savannahs still hold on in very small numbers.  Less than 1% of the native savannahs survives today and is Iowa’s most threatened landscape.  Without fire these areas will be overcome with invasive nonnative plant species that have adverse affects on animal life as well as water quality. The citizens of West Des Moines are fortunate that city leaders have moved to save one of these remnant areas in Southwoods Park.  Fire has been a tool used to restore this savannah over the past 12 years.  Other designated park lands have been used to recreate various prairie systems and wetlands.

In recent years, the importance of fire in these ecosystems has become mainstream and has been recognized as a valuable tool in maintaining and recreating these beneficial land forms.  Research into the effects of fire, beneficial and detrimental, is ongoing in many parts of the country.  Here in Iowa, a good deal of work is being done by the U.S. Fish and Wild Life Service at the Neil Smith Wildlife Refuge near Prairie City. The Iowa DNR has also recognized the need to increase acres burned and has partnered with local fire departments, park systems, land owners, and The Big Rivers Forest Fire Management Compact to create and subsidize training in prescribed fire application at The Midwest Fire Training Academy.  City of West Des Moines staff have participated in annual training through this program and in training provided locally by the Iowa DNR and many carry the same education as Red Card firefighters that work wildfires in other parts of the country.

Before the decision is made to use fire as a management tool on park lands, the condition of the area must be addressed.  Only those areas that are considered to already contain beneficial native plant species or those that have had reconstruction done and native plant species re-introduced are considered as possible burn sites.  Burning creates direct and indirect consequences and all must be considered.  Attention to the effects must be a priority.  For this reason, every site will not be burned every year and/or it may not be burned in the same fashion from burn to burn.  Timing of the burn is also a consideration.  The target plant species react differently to being burned at different times of the year.  A general rule of thumb is “forbs in the fall, grasses in the spring”.   Forbs (wild flowers) will benefit more from a burn in the fall where warm season grasses are best served with a spring burn.  For each site there can be one or more objectives which include:

From these objectives the benefits are:

Areas in parks to be placed into a burn rotation: 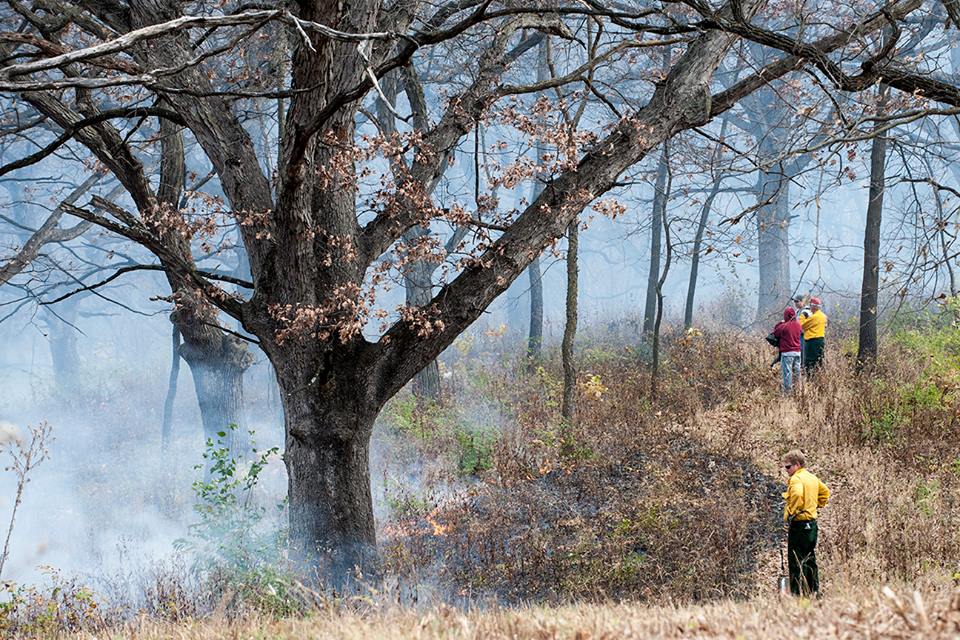 When burning is deemed appropriate for a site, approval is requested from the various organizations that have jurisdiction in West Des Moines.  This process takes place in late summer.  Fall burns could possibly begin in September and continue through May of the following year.   Even though the list stays the same from year to year the likelihood of burning at all sites in any given year is slim.

Organizations we request permission from include:

Each year equipment and personnel are evaluated and additional resources may be allocated to improve our ability to conduct prescribed burns.  There has been a high level of personal commitment among West Des Moines staff to improve and protect the natural resources within the parks system.  Many staff members have voluntarily taken part in training to gain a high level of expertise in fighting wild fire and conducting prescribed burns.

Once permission has been gained to burn in the parks system, we release the information to the press.  Over the years we have tried other methods, such as door to door notification, but have had limited success in making contact.  Additional notification will be done on an individual basis for those that request such.  The Parks and Recreation Department is always open to requests or suggestions on how to more effectively communicate with citizens.

After authorization has been gained from all authorities, seasonal requirements are met, and our work load permits the use of staff for burning, watching the weather until conditions are right becomes a daily affair.  The fact is that most days are not appropriate and very few are perfect.  There is no doubt that smoke management is our most difficult aspect of prescribed burning.  Protection of life and property may take a front seat in priority but can more easily be mitigated with equipment and training.  Careful considerations are given to wind speed and direction with the intention being that no to very little smoke will affect housing, schools or businesses.  It has been our intention to conduct burns without any road closures, but this may be a step that needs to be added to our process in order to complete burns as necessary.  Prescribed burning does produce smoke but it is widely accepted because the benefits outweigh the risk of pollution.

To minimize the impact of smoke on people, the following steps are taken:

When all of the needed aspects line up and we can see that the weather is possibly favorable for the next day, we go into the final portion of organizing a burn.  The following is a list of procedures, as they are performed: